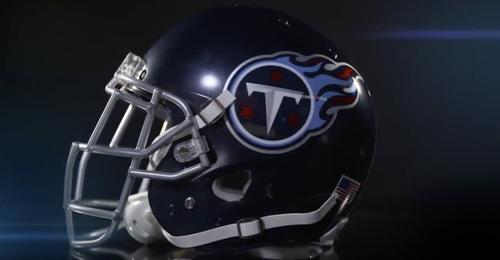 Marcus Mariota, Derrick Henry and the rest the Tennessee Titans will be wearing new Nike uniforms next season.

Several Titans players past and present, including their franchise QB, unveiled the new jerseys at an event in Nashville last night, in front a crowd numbered somewhere between 15,000 and 20,000, according to ESPN. Three iterations the new Titans uniforms were unveiled at the event including a navy blue (home), white (away) and a “Titan Blue” for color rush games.

The Titans’ will wear a navy blue helmet with a metallic silver facemask and a two-toned silver stripe resembling the sword from the team logo. The shoulders on the jersey also feature the two-toned silver in the shape a sword.

“You take our name, the Titans, and in Greek mythology they were gods, giant gods,” team controlling owner Amy Adams Strunk said per the team’s ficial site. “The thing that Nike started from the beginning was, Titans, it’s superiority. So we wanted that feel. It is going to be what you think a Titan.”

According to the Tennessee Titans’ press release, the color red accents the uniform, including the red stars on the inside back the neckline, which are inspired by the three stars from the Tennessee state flag. These also tie to the fireball logo.

The custom, angular number fonts on the jerseys were designed with Greek or Roman lettering in mind. Every number on each jersey is shaped in a way that exemplifies the Northeast corner Tennessee as the state appears on a map, a subtle ode to fans in the state.

Click here for the full story behind the Titans’ new unis.