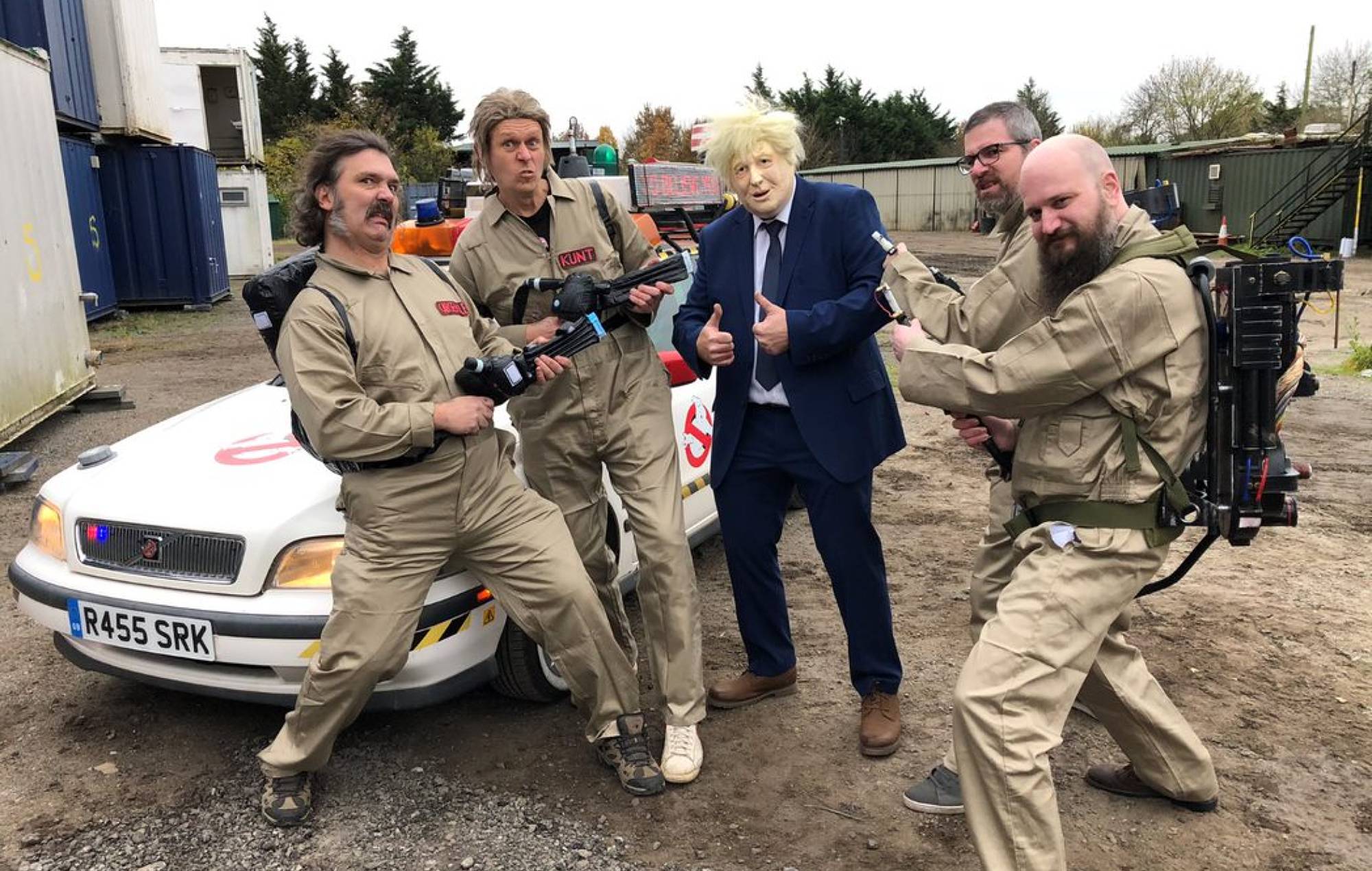 The Kunts have returned with another shot at the Prime Minister and an attempt to score a Christmas Number One with ‘Boris Johnson Is STILL A Fucking C**t’. Check it out below, along with our interview with frontman ‘Kunt’.

Having landed at Number Five in last year’s race for Christmas Number One with their visceral ‘Boris Johnson Is A Fucking Cunt’, the UK punks recently made their intentions clear to enter the battle once again with a new number clocking in at just over a minute for maximum streams, as well as sampling Depeche Mode and the theme from The Addams Family. It’s also already had the remix treatment from viral sensation Cassetteboy.

Speaking of their success last year, frontman Kunt this week told NME: “As someone who has spent most of the last 25 years peddling his sweary wares around 100-200 capacity pub venues believe me, it was overwhelming. I found the camaraderie and everyone getting behind the song fired me up even more – and fighting for the cause strengthened the bond between us all. And it made a few people angry, but you can’t please all the people all the time.

“In all honesty, the fact that we got to Number Five last year and then a year later Johnson was still in charge and nothing seemed to have changed left me feeling a bit depressed and that doing anything else would just be pissing into the wind. But mid-November I went for a pint with my fellow Essex music stalwart, Jon Morter who did the Rage Against The Machine campaign in 2009, and he mentioned the analogy of when trying to fell a big tree you don’t just do it with once chop of the axe, you have to keep chipping away. I came out the pub that night doubly determined to give it another shot.”

Check out the new single below, as Kunt tells us about his inspiration, his thoughts on Tories’ COVID response, and what he makes of competition from the likes of LadBaby, Elton John and Ed Sheeran.

Hello Kunt. What can you tell us about your thoughts on Boris Johnson and the Tories’ recent conduct and controversies – and how they’ve been behaving and handling themselves over the last year?

Kunt: “It’s not just the last year. The appalling way people who are struggling to make ends meet in this country [and] are treated goes back to way before Boris’s time – but previous Prime Ministers and governments weren’t quite so overtly blatant about the contempt they feel for the poorer sections of society as the current administration. The last year of lies, corruption, sleaze, cover-ups, attempts to take away our democratic rights to protest while also trying to make themselves less accountable. Then as a bonus, Matt Hancock nobbing his assistant and the Tories all partying and having quiz nights in Number 10 at the same time that we couldn’t hug our nans and 500 people a day were dying just shows the complete disregard they have for fairness and integrity. I can’t believe that after all that, anyone is still supporting them. You only have to see the front page of The Sun most days to see the contrasting narrative people are being sold.”

Do you have a message for Boris Johnson and the Tories?

“We see you. We know what you’re doing. You can change the laws and take away our rights but we will never give up fighting against it. The more draconian the laws become the brighter the fire burns inside us. Fuck you and everything you stand for, you horrible, heartless, corrupt, duplicitous bunch of c**s. And to the backbenchers who toe the party line and vote along with everything, you are the concentration camp guards who look the other way. The blood is on your hands.”

Have you had any feedback from Tory MPs or members on the tracks?

“Not as yet, but I’m always open to feedback so it would be great to hear some.”

What can you tell us about the songs you’ve sampled on this single?

“Since my teens I have been a massive fan of The KLF, not just the music but the way they conducted their business and their legacy. Before I started this year, I re-read their book, The Manual (How To Have A Number One The Easy Way), in which there are a set of Golden Rules about songwriting. One was to lift familiar riffs from other people’s songs as it gives you a head-start when people hear the track for the first time. So I took that literally and used one of the riffs they themselves used in their Number One ‘Doctorin’ The Tardis’, plus that glam rock beat which is ingrained into people from the ’70s and ’80s discos you’d go to as a kid.

“A happy accident meant it was the same tempo and rhythm as Depeche Mode‘s ‘Personal Jesus’, which coming from Basildon, felt like a good opportunity to give them a nod. And I stuck The Addams Family theme on the end because it’s a song you hear a lot without realising it, on piers and in arcades, and there isn’t a more irritating ear-worm. I figured if we get a hit this time round, in years to come whenever anyone hears that Addams Family theme it will remind them what a fucking c**t Boris Johnson was.”

What do you make of your chances of hitting Number One this Christmas?

“There’s definitely a bigger buzz already than at this point next year, but we are a few troublemakers chivvying people along on social media, compared to the massive major label publicity machine behind Sheeran, Elton and LadBaby – so whether we get there will be purely down to whether enough people find out about it in time, and also whether people really believe that together we can all make a difference.

What are your thoughts on the songs by Elton, Sheeran and LadBaby?

“Shit, obviously, but not just that. I think the line, ‘I know there’s been pain this year, but it’s time to let it go‘ [from Sheeran and Sir Elton’s ‘Merry Christmas‘] is badly misjudged and deeply offensive to anyone who has lost a friend or loved one in the pandemic. People have lost their homes and livelihoods. We have suffered loneliness, despair and mental health problems from the lockdowns – and here’s some c**t in a Christmas jumper with some other dusty, washed-up old c**t telling us to let it go. Fuck off, mate. That’s what Johnson wants, for us to all move on and let it go. We’ll decide when we’re ready to let it go, you patronising prick. That said, all the best to them.”

What would it mean if you did hit Number One?

“It would mean everything. Not just personally but the idea of it being written into the history books that at Christmas 2021 collectively we all stood up and said, ‘We deserve better than this’.”

‘Boris Johnson Is STILL A Fucking C**t’ by The Kunts is out now.