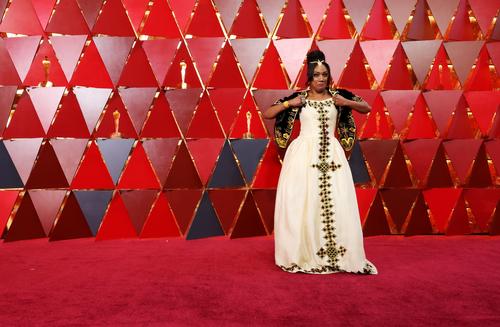 Tiffany Haddish thankfully secured a spot as a presenter during last night’s Academy Awards ceremony. The Girl’s Trip scene-stealer made sure she made a lasting appearance during her first trip to the Oscar stage, using her incandescent star power to make a statement in her own unique manner.

First f was Haddish’s debut Oscar red carpet get-up, which paid homage to her roots. Upon making her arrival during last night’s ceremony, the actress was decked out in a traditional Eritrean gown to honour her family heritage. Speaking to interviewers on the red carpet, Haddish reveals how her late-father “said one day I would end up here and if I ever ended up at the Oscars to honor my people so I’m honoring my fellow Eritreans.”

However, upon taking the stage with Maya Rudolph to present an award, Haddish noticeably switched out her red carpet ensemble into something more familiar. The Last O.G. star was seen wearing an Alexander McQueen gown that she had also worn to the Girl’s Trip premiere, as well as to her hosting gig during an episode  Saturday Night Live.

While it is seen as a Hollywood taboo to wear the same gown on multiple occasions, Haddish could clearly care less, once revealing how “if I die and even if I become fat as hell – if I’m the biggest, fattest – I don’t care. When I’m laying in that casket, guess what’s going to be laying on top my fat-ass body? This dress.”

Haddish purchased the Alexander McQueen frock with her own money, and for something valued in the thousands, she may as well get her money’s worth.