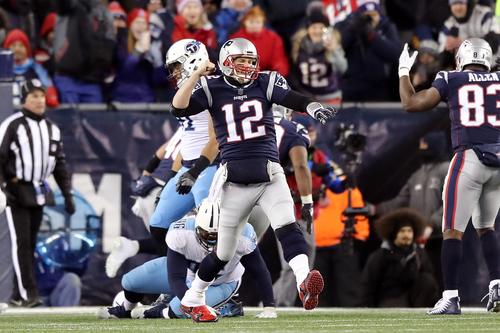 As easy as it can be to hate on Tom Brady, you got to respect the man.

Saturday evening the veteran quarterback once again accomplished the inevitable when he and the New England Patriots powered through a seemingly uneven matchup in the AFC divisional playfs agains the Tennessee Titans.

RELATED: Fans Reacts To Eagles Win Over Falcons to Advance to NFC Championship

While things got f to a slower start with New England trailing 7-0 in the first quarter, the next 35 points scored would be courtesy the northern juggernaut. Ultimately, Tom Brady finished with 35–53 for 337 total yards, throwing three touchdowns and no interceptions. This marks Brady’s 10th career postseason game with three touchdown passes, breaking the previous record held by Joe Montana. He also laid claim to the 13th playf game in which he surpassed 300 yards.

“You have to keep ignoring noise on the outside,” Patriots tight end Rob Gronkowski told NBC after the game in regard to the tension within the organization and outside talks surrounding it, “and just keep working every time you walk in the building and just keep grinding.”

Next week they will face f with either the Jacksonville Jaguars or Pittsburgh Steelers who will see each other on the field Sunday afternoon in a battle to continue their run toward the Super Bowl.