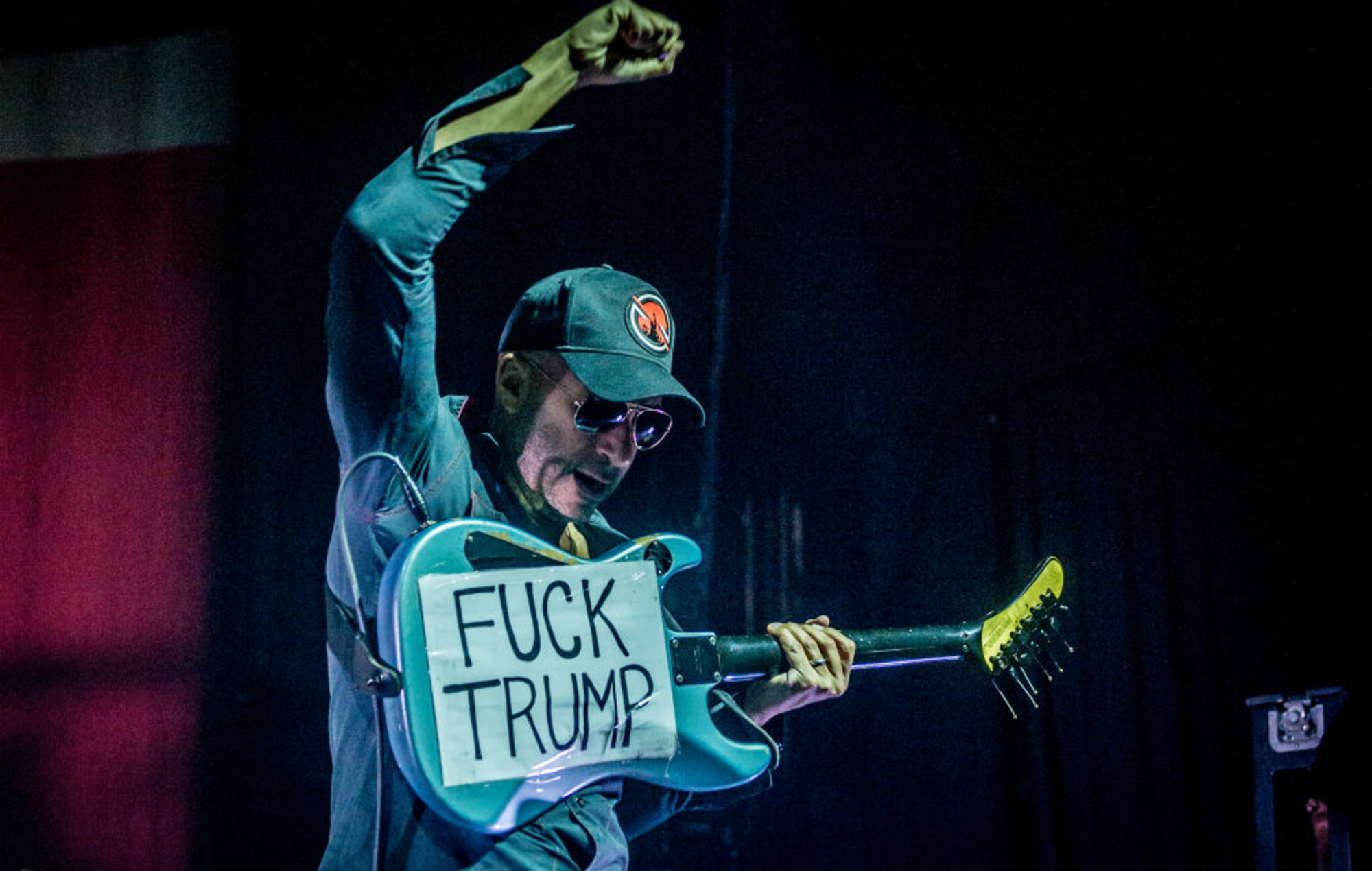 Tom Morello has shared his thoughts on a group of Donald Trump supporters using Rage Against The Machine‘s ‘Killing In The Name’ to campaign for the president’s re-election.

While the world awaits news of who will be the next US president, a video surfaced online yesterday (November 6) that showed a group of people in Philadelphia rapping and dancing along to ‘Killing In The Name’ while waving and wearing flags in support of Trump.

The explicit, politically-charged 1992 single, which features on Rage’s self-titled debut album, was written about revolution against institutional racism, police brutality and the state.

Morello has made it clear in the past that he is not a fan of Trump, calling him an “orange-faced demagogue” in an interview with NME, and then during a performance with Prophets Of Rage at Open’er 2017 he taped the message “Fuck Trump” to the back of his guitar.

The guitarist has now taken to social media to respond to the recently surfaced clip. Sharing the video, he tweeted: “Not exactly what we had in mind.”

Not exactly what we had in mind https://t.co/RydKGCk9RA

Morello isn’t the only one to respond to the video, a number of people have since flooded Twitter with their own take on ‘Killing In The Name’ being used by supporters of the President.

“HOW ARE YOU LISTENING TO RAGE AGAINST THE MACHINE AND BE A PART OF THE MACHINE?!” one person wrote. A second added: “When you miss the whole point of Rage Against the Machine.”

HOW ARE YOU LISTENING TO RAGE AGAINST THE MACHINE AND BE A PART OF THE MACHINE?! https://t.co/MFaeaqFWy6

When you miss the whole point of Rage Against the Machine https://t.co/1JQdjPM2q5

Public defender Scott Hechinger wrote: “These Trump people are dancing (terribly) to Rage Against the Machine’s “Killing in the Name.” A song about resistance to police brutality, killings, white supremacy, & fascism. “Some of those that work forces. Are the same that burn crosses.”

“Who gone tell them Rage against the machine was literally against capitalism and the state,” another Twitter user added.

These Trump people are dancing (terribly) to Rage Against the Machine’s “Killing in the Name.” A song about resistance to police brutality, killings, white supremacy, & fascism. “Some of those that work forces. Are the same that burn crosses.” https://t.co/8npc0hTyVD

reminds me that some people just don’t hear lyrics, just whatever “sounds good.” it’s why we got satanic panic in heavy metal, thinking “master of puppets” is hardcore devil music when all he’s singing is “don’t do drugs kids, drugs are bad mmkay” https://t.co/Ndial1DX0p

can… can someone please tell them about rage against the machine https://t.co/lgZZmS8o6L

Trumpies banging out to Rage Against the Machine. What a time to be alive. https://t.co/N56KJxjUVs

the irony of trump supporters dancing to rage Against the machine ….. I https://t.co/fG8jEIqloJ

If you’re wearing the blue line cop flag as a cape… I’m not sure you get Rage Against the Machine https://t.co/6CVca9m2SA

First it was Born In The USA

Then it Fortunate Son

Now it’s Rage Against The Machine

MAGA world is the most musically oblivious group of people on the planet. https://t.co/e5VGL6gpHv

Meanwhile, Rage Against The Machine have shared ‘The Battle Of Mexico City’ to streaming services to mark the classic concert’s 21st anniversary.

The live album was recorded at the Californian band’s show at Mexico City’s MX Palacio de Los Deportes on October 28, 1999, as part of ‘The Battle of Los Angeles Tour’. A VHS of the show was released in 2001, with a DVD following in 2002.

Marking the exact date they took to the stage 21 years ago, Rage have today uploaded the 15-song set to Spotify, Apple Music and other major music platforms.