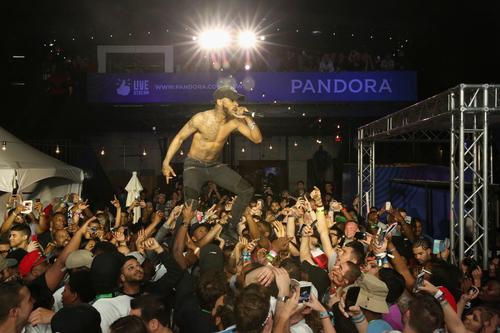 Tory Lanez Defends Women Who Have Sex On The First Date

Some women (and men for that matter) might have some preconceived notions about any individual who decides to get physically amorous on the first date. There are those who might peg them as “thots,” “hoes” or just simply “easy,” but rapper Tory Lanez want to change those perceptions. In fact, he took to social media not long ago to defend any women who want to go all the way on that first night.

Clad in a red hoodie, black cap and some iced-out bling, Lanez took a moment out his evening to bring some thoughts to the table about women in particular who decide to have sex with their partner on the first date. Long thought to be a sign desperation and/or griminess that diminishes their overall appeal to men, Tory takes the other side the argument and calls for the naysayers to, in essence, have a more open mind about the situation. Check out what he had to say below.

“Some y’all girls gotta understand, there’s] some girls who f**k on the first night, and they’re not actually hoes,” Lanez remarked. “Like, if you f**k on the first night, it’s okay.” He added that, if the series events on a date or random encounter build up organically to the point where sex is the natural progression in that sequence, then it’s totally fine.

What do you think? Did Tory Lanez get this one right, stating that women who do it on the first date aren’t actually “hoes?” Or is he looking at the issue in too simplistic a fashion? Let your voice be heard by responding in the comments.