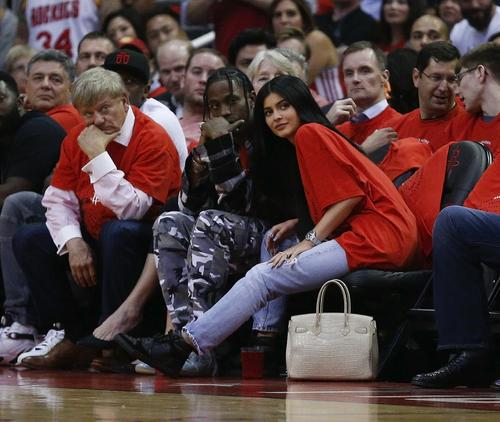 For the first time since the birth their daughter Stormi Webster, Kylie Jenner and Travis Scott, real name Jacques Webster, were spotted together in public as they were caught leaving Nobu Malibu on Saturday. They were seen getting into the $1.4 million LaFerrari sports car that is rumored to have been a push gift from Trav to the mother his child.

“They were there for about two hours and enjoyed each other’s company,” a source E! News. “They looked like they were happy to spend time with each other.”

Generally, Cactus Jack and Kylie are keeping their private life, well…private. Such was the circumstance surrounding the pregnancy and birth their daughter. “My pregnancy was one I chose not to do in front the world,” Kylie explained in a social media post after the birth Stormi. “I knew for myself I needed to prepare for this role a lifetime in the most positive, stress free, and healthy way I knew how.”

Right now, nothing much has changed as far as how eagerly we await the arrival Travis Scott’s forthcoming AstroWorld. Currently, we’re running on the fuel rumors to piece together any information we can about the effort, including the possibility PARTYNEXTDOOR and Tame Impala features. One thing is for sure though, Travis likely won’t disappoint.

“I worked so hard on Rodeo and Birds,” he explained in a Billboard interview last month. “It might not have been recognized by the masses, but my fans always went hard. This year I’m on a mission to be heard.”