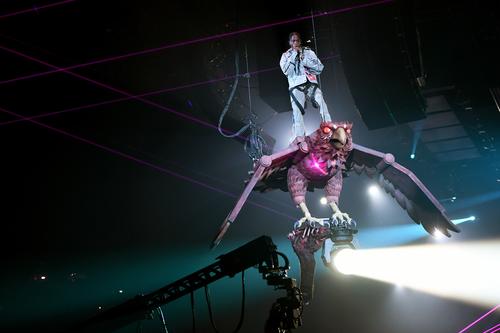 Travis Scott was among the guests at Diddy’s New Year’s Eve bash, as we saw earlier, however prior to the Miami party he made sure to get paid– by doing a performance to ring in the new year at Club LIV.

Travis Scott evidently didn’t have his girlfriend with him, although it would make sense that a pregnant Kylie Jenner wouldn’t be partying it up at LIV (plus she’s going to extreme measures to keep her belly firmly away from prying eyes, if she is indeed pregnant). Instead Kylie though, some the Kardashian-Jenner clan friends were out at LIV.

TMZ reports that Kylie affiliates, such as Justine Skye, Hailey Baldwin and Anastasia Karanikolaou were out at LIV, hitting up the DJ booth at one point in the evening.

It’s been a minute since we saw Travis and Kylie together, resulting in speculation that they may no longer be an item– however all fears (!) were washed away when the two shared a couple photo from the Kardashian Christmas Eve celebration. Even so, Kylie stans were apparently quite mad that the reality star is still keeping that baby under wraps.

Travis posted about the night’s performance, while TMZ has dug up some video footage which you can catch below. Do you think now that it’s a new year we’ll finally get a confirmation on expecting-Kylie Jenner and would-be-dad Travis?