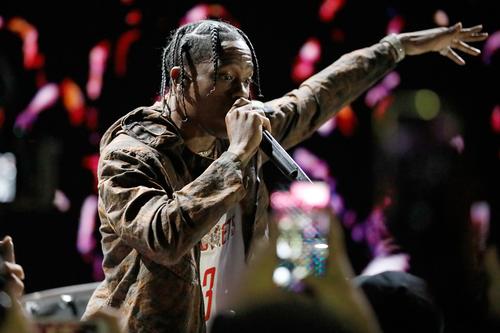 Like what happens to most men, it appears Travis Scott is a changed man since the birth his daughter Stormi Webster. Sources tell TMZ that the Houston rapper has been on cloud nine and in better spirits since Stomri was born on February 1st. He’s been spotted smiling, laughing & being calmer than usual.

His new outlook on life is apparently having a positive effect in the studio as well. Sources added that Travis is working on a new record at the moment, which his close circle believes will be his best yet, and Stormi’s reportedly getting props for it. They didn’t reveal anything further about the record, but Im sure it’s heat.

In addition to his new mood, Travis is also being super selective on what shows he takes. He’s been by Kylie’s side before & since the birth their child, and only serious cash will entice him to leave his little family.

Over the weekend, La Flame was rewarded the key the city for his hometown in Missouri City, Texas, and sources say during his downtime while there he was constantly face timing Kylie & Stormi.

Who knows when we’ll get to hear any post-daughter music from Travis, but hopefully it has this positive effect on it like reports are saying.

We’ll continue to keep you posted on all the latest with Travis moving forward.