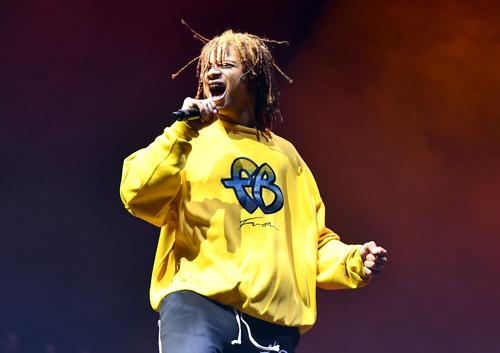 Trippie Redd stands out among his contemporaries in the current era hip hop. While he could easily be categorized as a “mumble rapper” just based on the time, he proves to be far from that. His penchant for melodies and overall delivery is far from mumbling. Even though he isn’t a massive superstar yet, he’s already got co-signs from some the biggest names in the game such as Lil Wayne, Drake and Travis Scott. Trippie recently made his way to Tim Westwood’s radio show where he proved that he isn’t a mumble rapper at all.

Trippie Redd made a pit stop at Tim Westwood’s studio for an interview and course, you can’t hit the Westwood studio and not drop some bars for him. Redd came through and dropped a few bars on the show over Jay-Z’s “Family Feud.” While it’s not common to hear Trippie do his thing without auto-tune, he still brought a bit melody to his delivery. Trippie does fumble on a few bars but at least it shows that he’s actually going f the top the dome.

During his interview with Trippie Redd spoke on several things including some the people he considers idols. Among that list is Kanye West, Lil Wayne and Drake. The rapper has collaborations with both Drake and Wayne that have yet to be released. He also spoke on the meaning “TR 666,” his collab with Swae Lee.

“My 666 is six protons, six neutrons and six electrons.” He said, “It’s basically in every color human being skin. That’s why I put it after that. Trippie Redd: black, light, dark. ‘Cause it’s like the vibe the song is kind like, dark.”

You could watch both his freestyle and interview below.