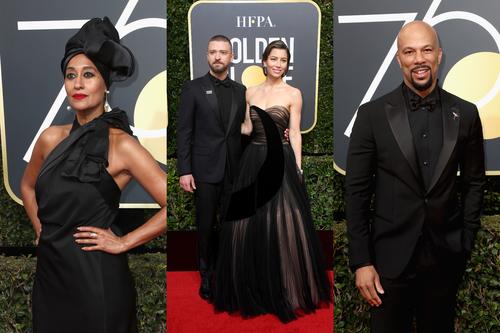 Prior to the airing the 75th annual Golden Globes Awards ceremony, stars were cooking up waves all on their own wth Hollywood’s collective decision to wear black on the red carpet as an effort to stand united against sexual harassment, assault, and gender inequality in Tinseltown and beyond.

“This is a moment solidarity, not a fashion moment,” actress Eva Longoria told the New York Times the move. “For years, we’ve sold these awards shows as women, with our gowns and colors and our beautiful faces and our glamour. This time the industry can’t expect us to go up and twirl around. That’s not what this moment is about.”

In addition to this statement, the red carpet was also host to eight prominent female activists who were accompanied by stars in an effort to further shine a light on the matters gender equality. It was Tarana Burke, senior director the nonprit Girls for Gender Equity and founder the #MeToo movement, who attended with Michelle Williams and Marai Larasi, executive director  Imkaan, who was Emma Watson’s guest.

“We believe we are nearing a tipping point in transforming the culture violence in the countries where we live and work,” the women said collectively. “It’s a moment to transform both the written and unwritten rules that devalue the lives and experiences women.”

Twitter had plenty thoughts on the stars’ black out the red carpet, with opinions treading across the spectrum both support and critique, particularly for perceived hypocrisy. Check it out below