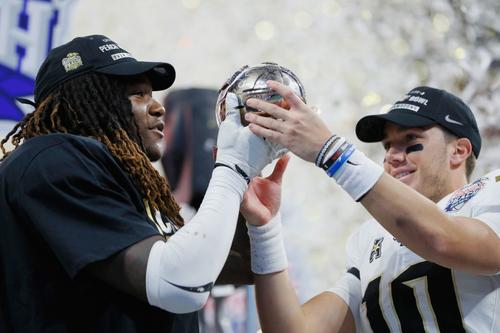 The University Central Florida football team completed their undefeated season on Monday night with a 34-27 victory over the Auburn Tigers in the Chick-Fil-A Peach Bowl.

UCF’s 13-0 record makes them the only unbeaten team in college football this season but because the Knights don’t play in a Power 5 conference, they finished the regular season ranked 12th by the College Football Playf selection committee. Therefore, despite their undefeated season, UCF was unable to compete for the National title.

That said, the team still considers themselves the 2017 champs, and they plan on celebrating as such. After defeating Auburn, the team that beat both teams competing in the National Championship game (Georgia and Alabama), UCF football changed its Twitter display name to “2017 National Champions.”

During an interview on Orlando radio station 96.9 The Game, UCF athletic director Danny White said the team will be raising a championship banner in honor the Knight’s 13-0 season. Additionally, there will be a parade for the UCF football team.

“If you take the long view the history college football, there’s an awful lot national championships being claimed by universities that didn’t accomplish what we accomplished this year in those respective seasons, so we feel we’re more than justified to claim our first national championship, and we think it’ll be the first many,” White told ESPN.

“I don’t think our kids should be penalized because we weren’t respected by the College Football Playf committee, nor should our program be penalized because we weren’t around 20 or 30 years ago when people were claiming national championships left and right. We’re trying to build our program and we feel very strongly as the only undefeated team and having beat Auburn, who beat both teams competing for the national championship, that we have an extremely sound case to claim the crown.”

According to ESPN Stats & Info, UCF is the 10th team in the BCS era (since 1998) to finish the season undefeated and not win the national title.