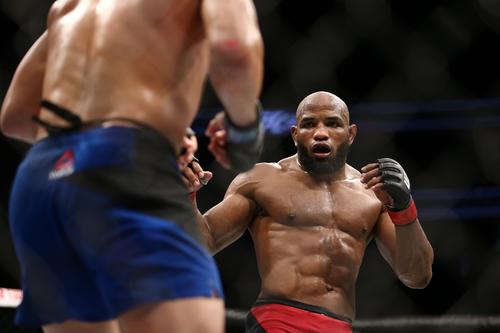 Saturday night, the self-proclaimed “Soldier Of God” Yoel Romero pulled out an impressive win over Luke Rockhold after stopping his opponent in only the third round their match up, but didn’t walk away with a title.

It was in the interim middleweight fight, headlining UFC 221 in Perth, Austrialia that Romero (13-2) knocked out Rockhold (16-4) at the 1:48 mark the third round, but his failure to make the 185-pound weight limit, going over by 2.7 pounds, meant he was ineligible for the title despite such an impressive showing. Originally, the card featured Luke Rockhold and the undisputed middleweight champion Robert Whittaker. However, an injury caused Whitaker to be bumped for Romero.

“I’m so sorry for Robert Whittaker,” Romero said post-victory. “He is the guy, but this is the plan God. Second, I’m so sorry for the weight cut. This was the first time in my career I could not get my body down. Rockhold is a very good athlete and an amazing fighter. … I’m very happy because I fight this time with the best.”

Following tonight’s fight, UFC President Dana White went on to confirm that Romero would get his chance in the Octagon against Whittaker again in a rematch the two men’s fight last July in which Romero suffered a loss by unanimous decision.

This now marks the fourth pressional loss Rockhold’s career. All four these losses have come as a result a knockout.