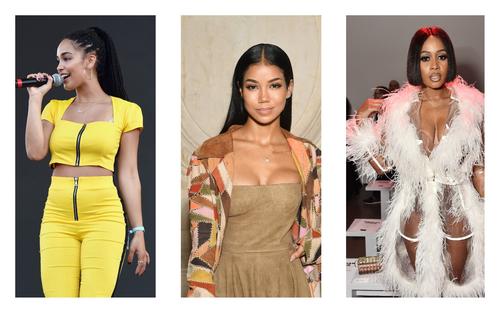 Insulated from the t-criticized “girl squad” surge popularized in mainstream pop music by genre juggernauts such as Taylor Swift and Katy Perry, the rise in clout, status, and the commercial success  female emcees within hip hop largely adheres to one golden rule– there’s only room for one at the top. As seen recently in the meteoric ascent “Bodak Yellow” hitmaker Cardi B upsetting fellow NY rapper Nicki Minaj’s contested reign as the current queen rap, the #BardiGang and the #Barbz/#TheKingdom respective stan groups quickly proved that they were not here for two female rappers sharing their spot atop the throne. More so than in any other genre, the women hip hop are embroiled in deep-set rivalries.

With such baseline hostility simmering behind each block studio time, the question must be asked– can female lyricists both criticize other artists within their genre while also building up deserving femcees? Will the formulaic requirements for Top 40 stardom make way for a pairing that rejects the fully-mic’d top-billed front emcee accompanied by the muffled vocals a lesser-known artist? With self-empowerment as the preferred affirmation, is there room to slowly replace “I” with “We”? Thankfully, a number female rappers, R&B artists, and singer-songwriters teamed up in 2017 to deliver fire tracks that serve as a lasting testament to the “Yes, we can” narrative. And we’d pick any one these beautiful ladies to be our Valentine.

Columbian-American singer Kali Uchis joined forces with London-based Jorja Smith for the mid-tempo groove track “Tyrant,” f Uchis’ yet-to-be-released full-length debut. Offset by the use subtle snare and high-pitched synth, Uchis and Smith team up to call out an unfaithful partner. “Word on the street, you got hoes/I disappear like El Chapo,” sings Uchis’, echoed by Smith’s soulful “Don’t think you can lie/I can see through your mind.”

Proving that they have much more in common than just a shared beef with Nicki Minaj, Remy Ma and Lil’ Kim joined forces for “Wake Me Up,” f Ma’s upcoming 7 Winters & 6 Summers album. Dressed in fur-lined high fashion, the two emcees flex throughout NY on the track’s visual, with Ma pausing briefly to light a gold crown on fire– a not-so-subtle nod to her reclaiming the “Best Female Rapper” title at the 2017 BET Awards. Paying homage with both a sample and a feature, Ma even included a throwback to “Queen Bitch” from Kim’s 1996 album Hard Core. Speaking with Zane Lowe Beats 1 Radio during the track’s premiere, Ma revealed her eagerness to snag Kim for the fire feature. “She is the Madonna the hip hop world to me,” said the rapper. “When I called her, I told her, ‘Listen, I want you on this record, but I want you to just be Kim. I want you to be girl that was squatting down in the leopard thong, I want you to be that Kim.’”

Intent on maintaining the flux her avant-pop vibe, Top-40 mainstay Charli XCX brought in American rapper Starrah and English singer-songwriter RAYE for a collab on her Number 1 Angel mixtape. After a lengthy, chilled-out and discorded intro, XCX cuts the beat with a muted auto-tuned hook punctuated by slow bass and clear hi-hat punctuation. To liven up the laid-back feel “Dreamer,” Starrah cuts in with a double-time flow wrapped over heavy kick drums, transitioning flawlessly to RAYE’s ode to securing the bag, stress-free. “Independent in my whip like rrr/In my baggy jeans, I’m pullin’ up like skrrt,” sings the 20-year-old “By Your Side” hitmaker. Merging trap-rap with easily listening, “Dreamer” is a can’t-miss track f XCX’s second-most recent mixtape.

The smooth Astronote production on Little Simz’ track “Customz” is complimented perfectly by the feature German-born, Def Jam-signed singer-songwriter Bibi Bourelly. Featuring saxophone and rhodes by Séou, the “raw and unmastered” track explores the highs and lows the jet-setting lifestyle adopted by any artist intent on sharing their work with the world. “Save your ass out from the hood fly your ass out to japan/Bye to KFC have some pad thai in thailand/Motorbikes on paris streets/Boy you know that I’m the man-dem hollering at me/What you saying out in London/Airport security tryna fuck with me in customz,” sings Bibi Bourelly, both waxing poetic about exploring the world while lamenting the pitfalls the fast life.

With its slick, chiptune-style production and sugary electropop beat, “Lipgloss” is undeniably a standout track f Charlie XCX’s Number 1 Angel mixtape. Featuring the stylings the unapologetically-prane, Chicago-based rapper CupcakKe, the song successfully merges the two artists’ penchant for spinning industry tropes on their heads (for example, XCX merges a Top 40 melody with a popping synth bed and CupcakKe drops an iCarly reference amidst explicit sexual imagery). Taking up two full verses on the track, CupcakKe has more than enough room to showcase her ability to serve up a steady stream raunchy bars: “So sticky, Winnie The Pooh ain’t got shit on this/Come get you a sample, lick between the camel/P—- taste sweet ’cause I ate my pineapple.”

The lyricism alone on the Brandy-assisted track f Jhene Aiko’s surprise-dropped Trip album is more than enough to ensure the staying power the record. With poignant lines sandwiched between a gritty, soulful melody, the track comes f as more a introspective prayer than a mere song: “I know a cover girl/From another in the world/Analog, not digital/Invisible and spiritual,” sings Aiko in a clear testament to self-love and spiritual soul-searching. For Aiko, landing a feature from the veteran R&B star was no small feat considering the fact that she believes Brandy has “the perfect voice”– high praise from the Grammy-nominated artist.

Rapsody called on Amber Navran, one-third the neo-soul trio Moonchild for the track “Jesus Coming” f her 2017 critically-acclaimed album Laila’s Wisdom. Atop a sample Otis Johnson’s “Time to Go Home,” Rapsody employs her t-praised evocative lyricism to lament about the sorrow lives lost to gun violence. “I was having fun then mama said its/’Time to go’/Then I heard thang go bang bang- bang bang bang -bang now we lying out here it’s time for us/’Time to go’/She grabbed me tried run but it was far too late and now we staring at the sun she waiting on me,” spit Rapsody, cementing herself as a poet-lyricist in an age auto-tuned, repetitive bars.

Fusing the golden age peak-’90s R&B with the current surge the trap subgenre, Miami-based rapper Trina called on K. Michelle’s stirring vocals to round out the hook on her track “If It Ain’t Me.” With booming 808s cutting through K. Michelle’s rendition Patti LaBelle’s “Somebody Love You Baby,” Trina delivers hard-hitting bars aimed at a less-than-faithful lover asking the question– if it ain’t her, then who? Noteworthy lyrics: “I get dudes by the dozen/Say you at work but you wasn’t/Then I got word from my cousin/That you was fucking a buzzard”

The ATL-based R&B duo signed to Beyoncé’s own Parkwood Entertainment made waves in 2017 with their track “Grown,” serving as the theme song for Kenya Barris’ black-ish spin-f titled grown-ish. Along with their foray into acting the same series, CHLOE X HALLE managed to craft a poignant anthem the joy and uncertainty that accompanies aging atop echoed snap/clap backing instrumentals. Lyrics like “Watch out, world, I’m grown now/That’s about to go down/My heart beating so loud/Mama, look, I’m grown now” force the listener to return to the open landscape burgeoning adulthood–asking yourself each day “who am I gonna be today?”