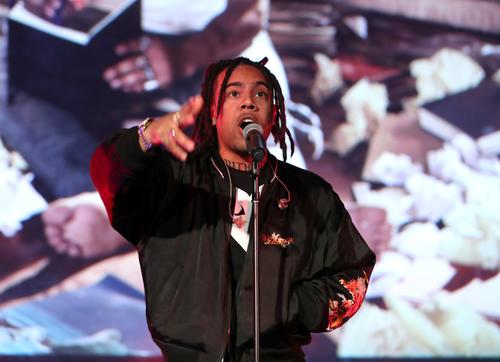 Vic Mensa has penned an essay on the conflict between Israel and Palestine, and its similarities to American racism, for Time magazine. In the opening paragraph, he makes his stance on the matter very clear. “I am not anti-Semitic, and the views expressed in this essay are in no way an attack on people the Jewish faith,” he says. “M]y criticism lies with the treatment Palestinian civilians by the state Israel, no more and no less.” The piece is inspired by a trip Mensa took to Palestine last summer with a group  African-American artists, scholars and activists. As he states in the essay, Mensa’s observations the conditions the Palestinian people on his trip brought to mind the struggles black Americans. He saw parallels to both the water crisis in Flint, Michigan and Chicago’s disenfranchised neighborhoods during his visit, as you can read in an excerpt below.

Staring into the worm-infested water tank on top a dilapidated house in Aida refugee camp, I can’t help but think Flint, Michigan, and the rust-colored lead-poisoned water that flows through their faucets. As I gaze over the 25-foot “separation wall,” the economic disparity is acutely transparent; the Israeli side the wall looks like the Capitol in The Hunger Games, while the Palestinian side reads like a snapshot from a war photographer. It’s as if the South Side Chicago’s most forgotten and disenfranchised neighborhoods were separated from the luxury Downtown’s Gold Coast by a simple concrete wall. The sight alone is emotional, and many people in the group cried on that ro. Rage cannot describe how I feel thinking the insects swimming in that water tank, while just across the wall is an Israeli settlement with an Olympic-size swimming pool.

In another passage, the detained Palestinian children gave Mensa flashbacks to his early experiences with police as a black kid in Chicago.

In Palestine, I met children as young as 12 years old that had been detained by the IDF. At any given time, hundreds Palestinian children are detained in Israeli prisons, many them under the age 16. It gave me chilling flashbacks to my earliest experiences with police as a black boy in America; ficers forced us to the ground with pistols drawn for the common crime mistaken identity.

Later, Mensa expresses that his American passport awards him a “higher position in the social hierarchy Jerusalem than it did in his] hometown Chicago.” He speaks to an elderly woman in Hebron, who has refused to give up her house, saying “This is my home, it protected me and I will protect it.” Read Mensa’s full essay one the TIME website.

Vic has ten been outspoke on politics. In November, he spoke out in support gun control. “You’re not going to fight f a tyrannical government with an AR-15 or an M16, so give it up,” he said. “It’s not a constitutional right.” In July, he condemned rappers who have abused women. “They’re not problematic artists, they’re cowards,” he said. “We get into this place confusing, like, troubled and charismatic people with just cowards. Like, beating up women on video, as these rappers continue to do, and then their little fans continue to support them for it.”