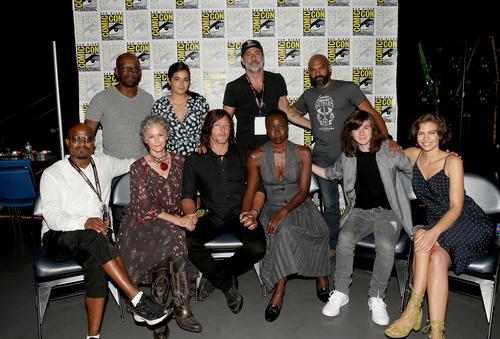 The Walking Dead walkers have done a lot over the course the seven seasons. However there is one thing the gruesome zombies have never done, and that’s about to change in the upcoming second part the eighth season.

Executive producer and director Greg Nicotero recently chatted with Entertainment Weekly on the anticipated season and told the magazine that for the first time, they will show a naked zombie. “There’s an episode where we did our first fully nude walker. We’ve never done that before,” he said. No details were revealed on the sex the zombie or who will be subject to the naked creature.

With how on point the show has been with creating the scary ass looking walkers, we’re super curious as to how they will make a naked one look. The second half season eight is set to return on February 25th.

As for more details on the second installation, (*spoiler alert*) Greg mentioned that things are different since “Negan and his group have escaped the Sanctuary.”

“I think the second half the season, there’s much less talking about what’s going on,” he said. “Clearly, the balance has shifted. Now that Negan and his group have escaped the Sanctuary, there’s not as much talking about what the ramifications are what we’re going to do, but now our group has to be on the defensive because Negan’s out and he’s pissed and it’s definitely a different dynamic than the first half the season.”