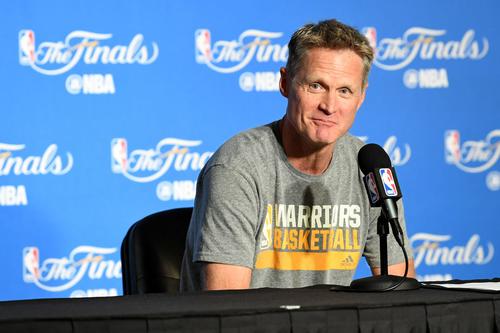 NBA coaches across the league are weighing in on recent comments made by LaVar Ball during an ESPN interview, in which he criticized Los Angeles Lakers head coach Luke Walton. According to LaVar, Walton has lost control the locker room and some players on the team have given up on him.

After publishing LaVar’s comments, some coaches, including the Dallas Mavericks’ Rick Carlisle and Detroit Pistons’ Stan Van Gundy, called out ESPN for giving the Big Baller an opportunity to undermine Walton.

Yesterday, during a press conference, Warriors coach Steve Kerr gave his take on the subject and how sports are covered by media outlets nowadays. Kerr gave a lengthy statement but he summed the situation up best when he compared LaVar Ball to ‘the Kardashian the NBA or something.’

He told reporters, per the San Francisco Chronicle,

“Where we’re going is we’re going away from covering the game, and we’re going toward just sensationalizing news. It’s not even news, really. It’s just complete nonsense,” Kerr said. “But if you package that irrational nonsense with glitter and some ribbons, people are going to watch.”

“Somewhere, I guess in Lithuania, LaVar Ball is laughing.” Kerr said. “People are eating out his hands for no apparent reason, other than that he’s become the Kardashian the NBA or something. That sells, and that’s what is true in politics, entertainment and now in sports. It doesn’t matter if there’s any substance involved in an issue. It’s just, ‘Can we make it really interesting for no apparent reason?'”

Check out Kerr’s full comments about LaVar Ball below.