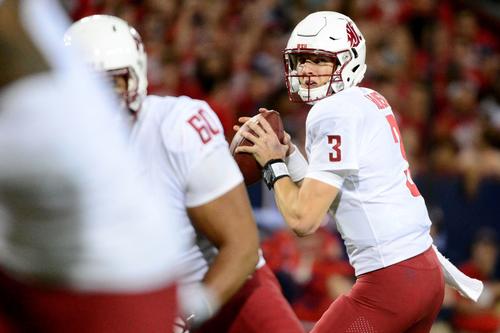 Washington State quarterback, 21-year old Tyler Hilinski, was reportedly found dead in an apartment in Pullman, Washington on Tuesday, according to police.

The report by Pullman police states that Hilinski suffered a self-inflicted gunshot wound to the head. A rifle and suicide note were found next to him.

RELATED: DeAndre Jordan Wants Trade To Houston According To Stephen A. Smith

According to ESPN, ficers responded to Hilinski’s apartment to conduct a welfare check after he didn’t show up to practice earlier in the day.

Hilinski had just finished his redshirt sophomore season for the Cougars, in which he started the team’s bowl game against Michigan State. He was expected to take over the starting role next season.

“We are deeply saddened to hear the news Tyler’s passing,” Washington State coach Mike Leach said in a statement. “He was an incredible young man and everyone who had the privilege knowing him was better for it. The entire WSU community mourns as thoughts and prayers go out to his family.”

“The tragic news today surrounding Tyler Hilinski is devastating to all. Tyler was a tremendous individual, great friend and teammate, and he will be deeply missed. Our hearts go out to his family and friends,” interim athletic director John Johnson said. “Earlier tonight, the football team was brought together and informed the tragedy. There, they were met by campus and department counseling and psychological services, including athletics’ on-staff clinical psychologist and a licensed mental health counselor, along with WSU Athletics medical team. The university will continue to coordinate and provide ongoing counseling care for all student-athletes as long as needed.”

Hilinski’s younger brother, Ryan, one the top QB prospects in the Class 2019, released the following statement.

“We, as a family, are grieving after receiving news that my brother, Tyler Hilinski took his own life this afternoon,” the statement read. “We are in complete shock and disarray. Tyler was the kid that put a smile on everybody’s face when they were down, especially his family. We will mourn the loss Tyler for some time but celebrate the way he lived his life every day.”