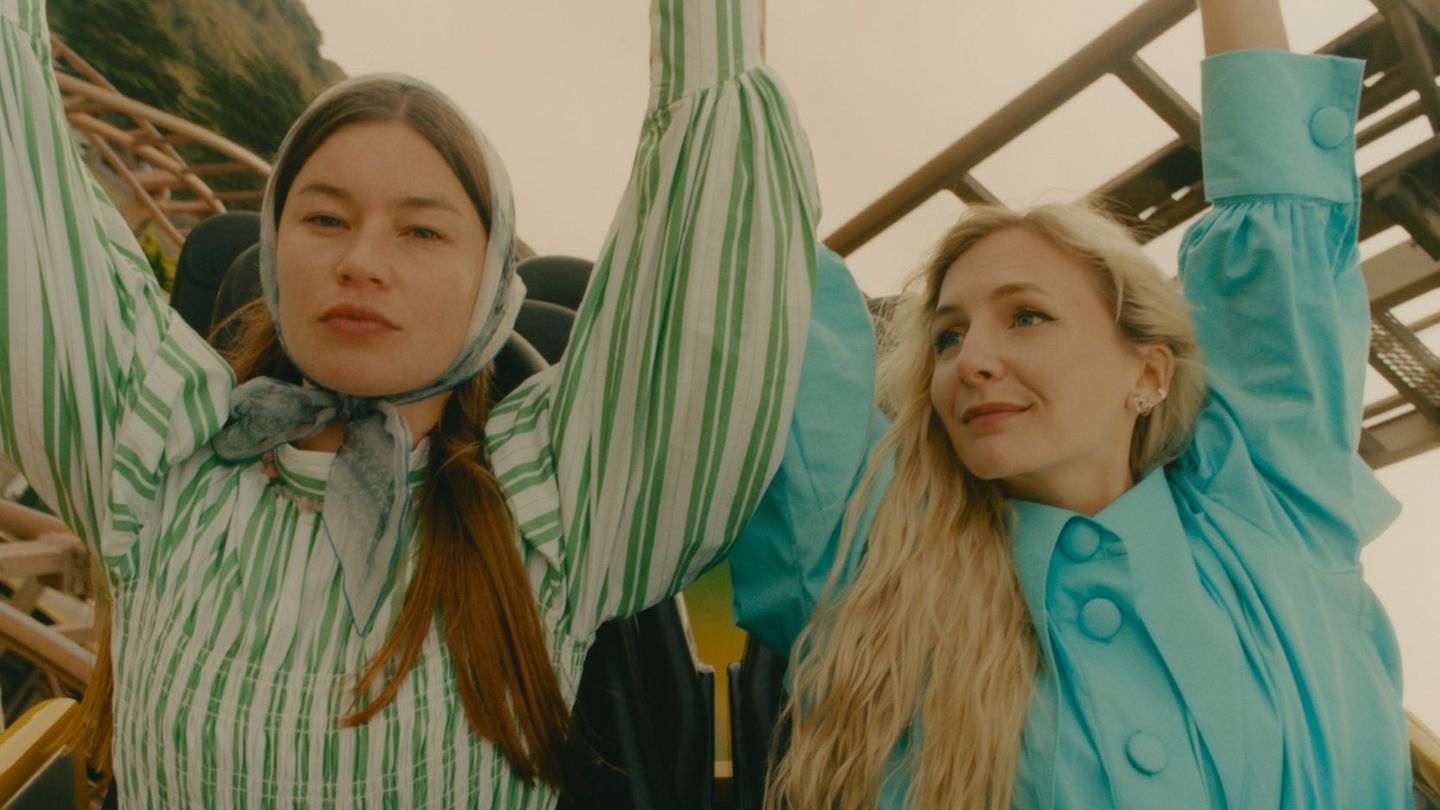 If you haven’t heard the song? Get ready to meet Wet Leg. The song, of course, is the riotously fun, incredibly clever “Chaise Longue” from the band of the moment (seriously). With its knowing references to Mean Girls (“Would you like us to assign someone to butter your muffin?”), zippy guitar, and a seriously cool bass line, it’s no wonder many dubbed “Chaise Longue” the indie song of last summer.

The fervor surrounding the group — formed in 2019 in the Isle of Wight by college friends, rhythm guitarist-lead singer Rhian Teasdale and backing vocalist-lead guitarist Hester Chambers — took off astonishingly quickly, traveling from hitmaker BBC Radio 6 Music to the ears of Iggy Pop himself, who called out the track’s sharp drumming.

The rising tide has finally reached the shore, as that smash single is joined by a sonically varied roster of 11 additional songs on Wet Leg’s self-titled debut, out today (April 8) on Domino Records. With each day, the group’s most well-known track reaches an ever-expanding audience — not bad for a late-night, at-home demo recorded in a living room containing an actual chaise longue.

Could it be the fact that the band’s name hails from a game they played, punching random emojis into a keyboard? Is it the group’s effortless blend of tongue-in-cheek flair, suitably tinged with the millennial despair of the terminally online, that strikes a chord?

Or perhaps, is it an undercurrent of early-aughts nostalgia, as the band counts the White Stripes and early Kings of Leon among its influences?

Wet Leg sprang from a “pact” the duo made when playing festival shows as part of Teasdale’s previous solo project, RHIAN— that the band now exists as it does is a bit of good fortune that’s not lost on either of them. The group themselves are still trying to make sense of it all.

“I don’t understand it. It’s like having really big shoes that you have to wear and pretend that they fit,” Teasdale told MTV News over Zoom with a laugh. She was lounging with Chambers on the floor in front of a cozy electric fireplace the afternoon prior to a San Francisco show.

That unbelievable buzz has followed them all the way across the pond and throughout the United States, revealing itself in surprising ways.

Befitting the pandemonium surrounding any boy band, Teasdale and Chambers had not one, but two bras (and a custom T-shirt) thrown their way during a packed March show at the former steel factory-turned-music venue Brooklyn Steel. In the process of selling out shows back in the U.K. and in the States (including a well-received stint at “rite of passage” South by Southwest), the band was greeted by ever-more impassioned displays of fandom, including a Seattle concert offering of “really cute” small, neon plastic toys tossed onstage.

A funny gesture though it might be, it’s indicative of one thing: People really, really love Wet Leg. Even with just four songs released, the band sold out a string of December shows in New York and Los Angeles before returning months later to even larger venues, packed with hundreds upon hundreds more people. (They jumped from the tiny Union Pool to nearby Brooklyn Steel in March, drawing nearly 1,700 more fans in the process.)

As if sold-out concerts and a flurry of TV appearances weren’t enough, the band has drawn at least one glowing comparison to the likes of The Beatles. Yes, The Beatles. In spite of it all, Teasdale and Chambers prefer to remain focused in an almost tunnel vision-like way, asking management and friends to refrain from sending stories about themselves.

“It’s confusing, as well — because we like music, listening to music. There are so many awesome bands… that we listen to, and it just does make you appreciate how subjective art and music is,” Chambers said.

Teasdale and Chambers, who have rounded out their band with college and music scene friends for a close-knit, bouncy, and energetic live sound, have since heard Wet Leg singles on the radio and in pubs back home. A bashful, laughing Teasdale called the phenomenon “really weird!”

They remain excited, if somewhat bewildered, by their success, yet appreciative of the process, no matter how tiring it can be. As ever, they’re focused on the next show. “We’re pretty busy most of the time so we really don’t think about anything much,” Teasdale said with a laugh.

In such a short time, they’ve come a very long way. Signing with Domino Records allowed the band to level up from its original demos substantially, working with producer Dan Carey (past credits include Fontaines DC). However, various parts of their initial recordings found their way onto the eponymous album.

The LP was actually finished in London in the space of about two weeks in April 2021 — call it an odd sensation to have a complete record in your back pocket without a proper single out in the world. The full-length effort is a distinct, relatively compact offering that stays true to what you already might have heard from Wet Leg — with a few fun twists. Seven of its 12 songs clock in at about 3:20 or under (five of those tracks also come in under the three-minute mark).

Like a viral, memorable tweet that pops up on your timeline and sends you down a rabbit hole, Wet Leg don’t need a ton of time or space to grasp your attention. And they continue to hold it throughout the self-titled debut. The record is packed with statements all their own, be they clever innuendos or knowing nods to online culture. It jumps right into the fray with the lean, garage rock-tinged opener “Being in Love.”

Lest one think the fresh, fast-rising band to be a flash in the pan, consider the depth found in the quietly sad ode “Loving You,” which places a simple riff alongside a tale of a former lover’s new partner: “Sorry if I seem a little bit upset / When you say she looks a little bit like me when we first met.” The cheeky “Wet Dream,” buoyed by an energetic call-and-response and sly, mischievous lyricism, is another highlight. As ever, Wet Leg are squarely in on the fun.

“I Don’t Wanna Go Out” and “Supermarket” take a more mid-tempo approach at different points on Wet Leg, while the impressive album closer “Too Late Now” channels, say, Pixies. Its coolest, most relatable moment is the spoken word interlude leading to the song’s deliriously energetic final minute: “Now everything is going wrong/I think I changed my mind again / I’m not sure if this is a song / I don’t even know what I’m saying.”

When the record does draw to a close, it leaves the listener pleasantly exhausted, oddly happy yet reflective, and most of all, very, very seen. The band ruminates on expanding that signature Wet Leg sound. Teasdale and Chambers noted a recent Seattle show by psych-rock band Kadabra was memorable and inspiring. For now, Chambers said the group simply wants to “just count our lucky stars.”

“Everything that we’re doing is beyond anything that I could have ever seen us doing,” Teasdale said. “We just want to take in all the good stuff that keeps happening. Not that we’re not ambitious. Where we’re at now is just so wild.”

Wet Leg, just like you, are really trying to figure it all out as they go. Suffice to say, they’re doing wonderfully so far.