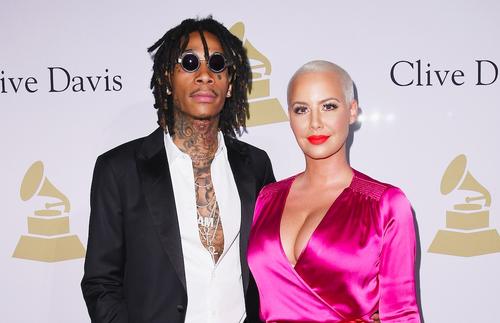 Last year, Wiz Khalifa and Amber Rose threw their son Bash a super-hero themed party where they dressed up as Batman and Batgirl. This year, it seems Bash wanted to do it all over again, so Wiz and Amber came through with some villain costumes as the Joker and Harley Quinn from Suicide Squad. Some images from the party have emerged on Instagram, showing the Bash and his friends (some you might recognize as the children other celebrities) dressed up and having fun, as well as meeting actors portraying Batman and Superman.

Bash, short for Sebastian, is now 5. Wiz Khalifa celebrated his son’s birthday on the proper date, the 21st, with an Instagram post. “Today is my beautiful son Sebastian’s 5th birthday. Dropa angel emoji] if your kids are everything to you,” he said. Amber revealed earlier this month that she let Bash dye his hair blond for his 5th birthday. “Lol he begged me for a whole year to dye his hair blonde like mine so we started with a little patch and I told him when he turns 5 I will make him a full blonde like his mommy,” she said. “He will be 5 on the 21st February! He’s so happy and none you dirty little trolls can take that away from him or me! ??? P.S Love your children unconditionally and let them be creative this world will be a better place.”

Despite splitting in 2014, Wiz and Amber have been co-parenting Bash over the last few years, and appear to be on very good terms.

Check out the photos and video from Bash’s party above.