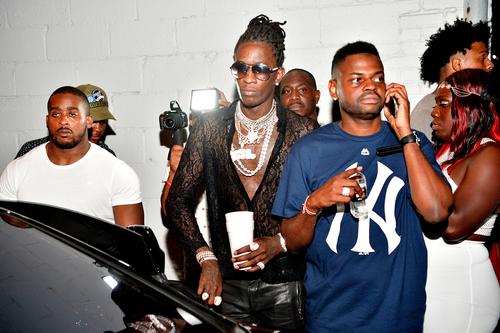 Young Thug Flexes By Showing Off His Luxury Car Collection

Young Thug has quietly become one the most prolific rappers the past few years. In fact, 2017 may have been his best year yet, with Beautiful Thugger Girls and his Future collab Super Slimey earning him not only thousands new fans around the world, but also huge amounts cash to go along with that added exposure. What does one do with that kind money when you’re in Thugger’s position? Well, buy some sweet sets wheels, course.

RELATED: Young Thug & Travis Barker Have Something Cooking In The Studio

The ATL sensation took to Instagram yesterday (January 9th) to flex hard for his followers, showing f his collection luxury cars for the camera. There are seven total that appear in the frame the photo, with a Porsche, a drop-top Maybach and many other expensive examples automotive excellence counting themselves as part the rapper’s collection. If you need any extra motivation to get that bag, this should probably do it for you. Check out the full post below.

Young Thug captioned the video with, “When it’s lit… your own hate,” presumably referring to the fact that some naysayers will always come out the woodwork once the checks start rolling in. However, that doesn’t mean he’s keeping all his wealth for himself either. Earlier in 2017, he celebrated his own birthday by dropping f a generous gift to his mother – one that was to the tune $50,000. I mean, when you’re breathing in the rarified air wealth and success that Thugger’s rap skills have earned him, there’s nothing wrong with treating yourself, or others, once in a while.

Which is your favorite car from Young Thug’s collection? Let us know in the comments.