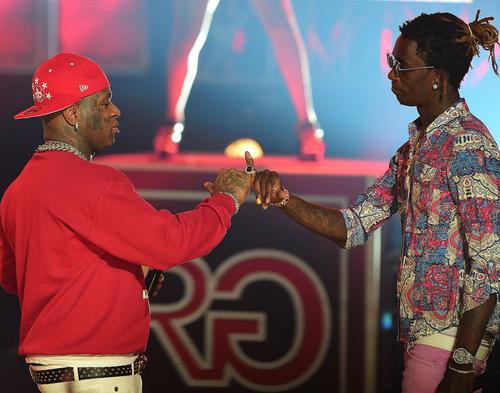 Birdman has developed plenty notoriety throughout his long and admittedly impressive career. Say what you will about the man, but Baby’s Cash Money empire has helped solidify the rapper turned mogul’s legacy. And while Birdman’s reputation has been dragged through the mud in recent years, largely over his ongoing business disputes with “son” Lil Wayne, it’s clear that he still has some ride or die allies in the fold. Namely, one Young Thug. To be fair, Thugger has been linked to Cash Money for years now; while he was never ficially signed to the label, he always maintained a close relationship with Birdman.

It appears that their relationship has remained close to this day. In a recent IG video, Birdman takes the opportunity to talk his shit, repping for “YSL Rich Gang” and firing f some vitriol at his haters. Young Thug slides in to add his take on the situation, repping Cash Money and echoing Birdman’s sentiment. “Any n***a that got a problem with Birdman], just automatically know you got a problem with me,” says Thug. “On God.”

RELATED: Young Thug Says He’s In Need Of Sex And Twitter Has Some Thoughts

While some might take issue with Thug’s loyalty to Birdman, it does reveal that Baby isn’t quite as much a villain as public perception might suggest. While his involvement in stymieing Lil Wayne’s “Carter 5” has caused frustration across the board, the situation is likely more complicated than it appears on the surface. Either way, it’s interesting to see Young Thug and Birdman still rolling together in 2018; perhaps Thugger will be linking up with some the Cash Money crew in the New Year. Speaking which, it would have been crazy to hear Thugger over some those classic Mannie Fresh beats…