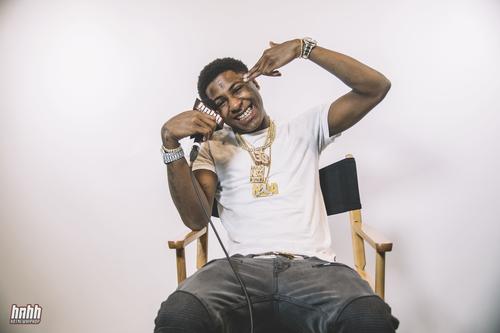 YoungBoy Never Broke Again had an incredible 2017 however, he still sparked some major controversy. He’s never been one to hold his tongue and he constantly speaks his mind regardless the backlash. On top that, he’s never really apologized for anything that may have fended some. The most recent controversy he’s been involved in actually involves his new girlfriend. The rapper allegedly made her sleep on the couch a hotel lobby recently which he has since denied.

A hotel worker snapped a picture YoungBoy Never Broke Again’s girlfriend sleeping on a couch in the lobby the hotel they were staying at. While both them have denied that he made her sleep in the lobby, rumors started floating around that said YoungBoy Never Broke Again kicked her out in order to have other women in there. However, his girlfriend later refuted that in an Instagram Live session. She told her followers that it’s not as “bad as it seems” and that she’s good. She continued to say that she slept on the floor because “she wanted to.”

In a following post, she put the hotel worker on blast for posting the picture her in the hotel lobby. She said that the girl who posted the picture is trying to “gain fame” f her name.

“I bet you after you left that hotel, after you took that picture me, you went and laid in your momma house. Bitch, I don’t stay with my momma and I’m 17, you feel me?” she said.

However, it seems that all is well between the two them. Youngboy took his girl on a shopping spree at Louis Vuitton and other high end fashion stores. He later posted another video on his Instagram story where he said that she was the one that decided to sleep in the lobby.

Check the posts below TheShadeRoom.